Previous prototypes have called for the metal plates and brackets to be tumble polished. However, we have found through some experimentation that tumble polishing is not good enough. Now we are using a three step process: 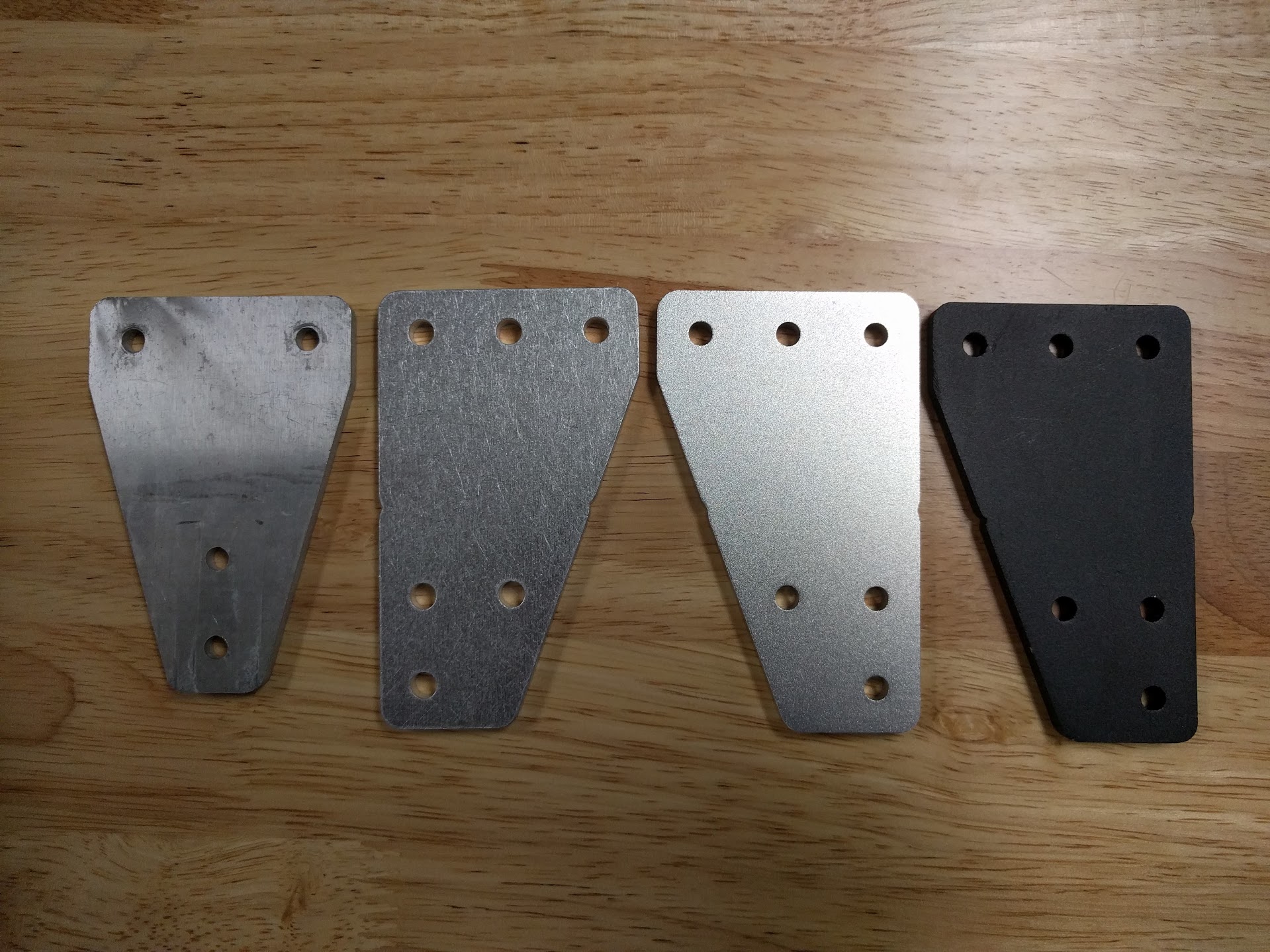 All M5 holes have been reduced in size from 5.5mm to 5.25mm to reduce the propensity to install them misaligned. 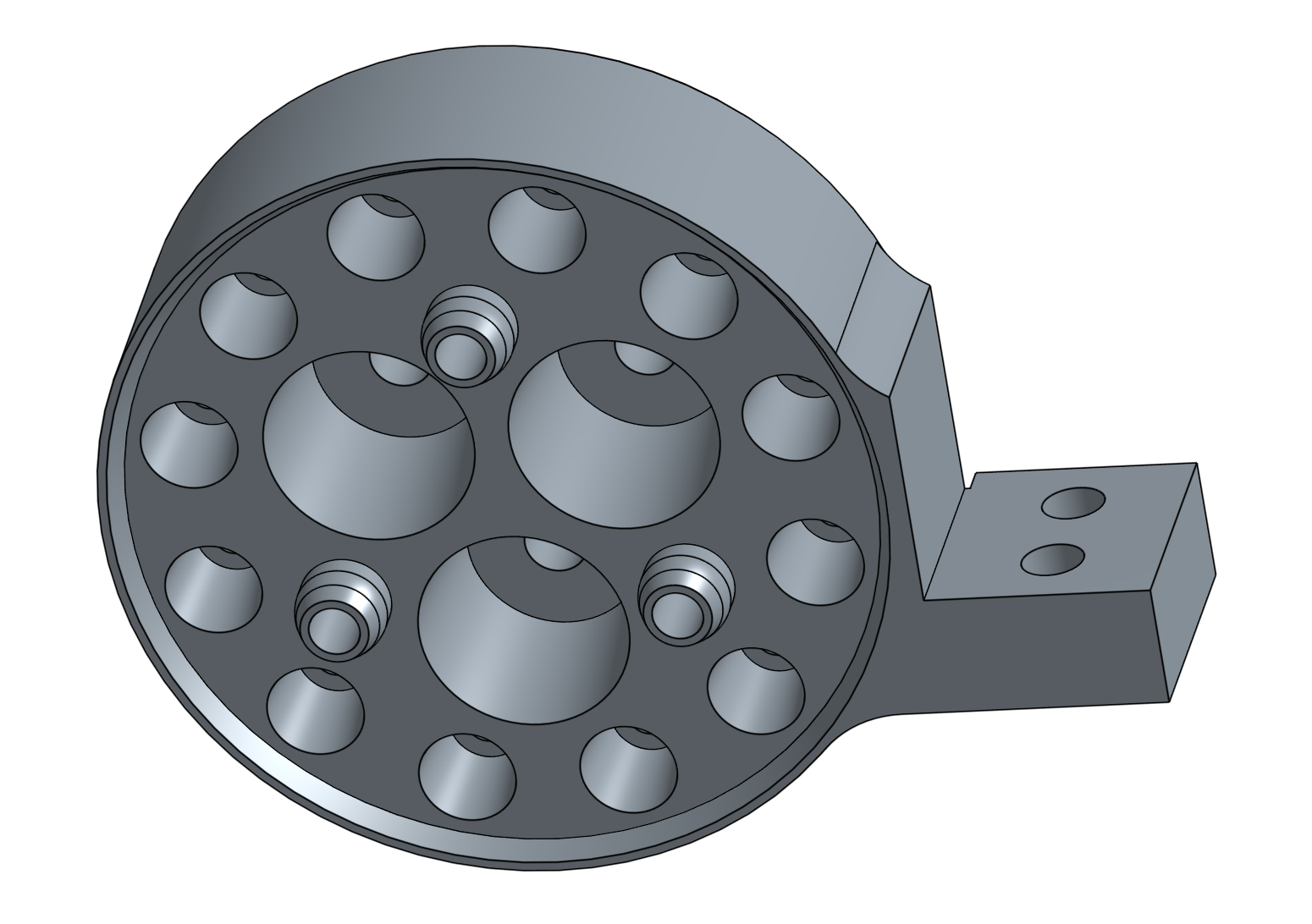 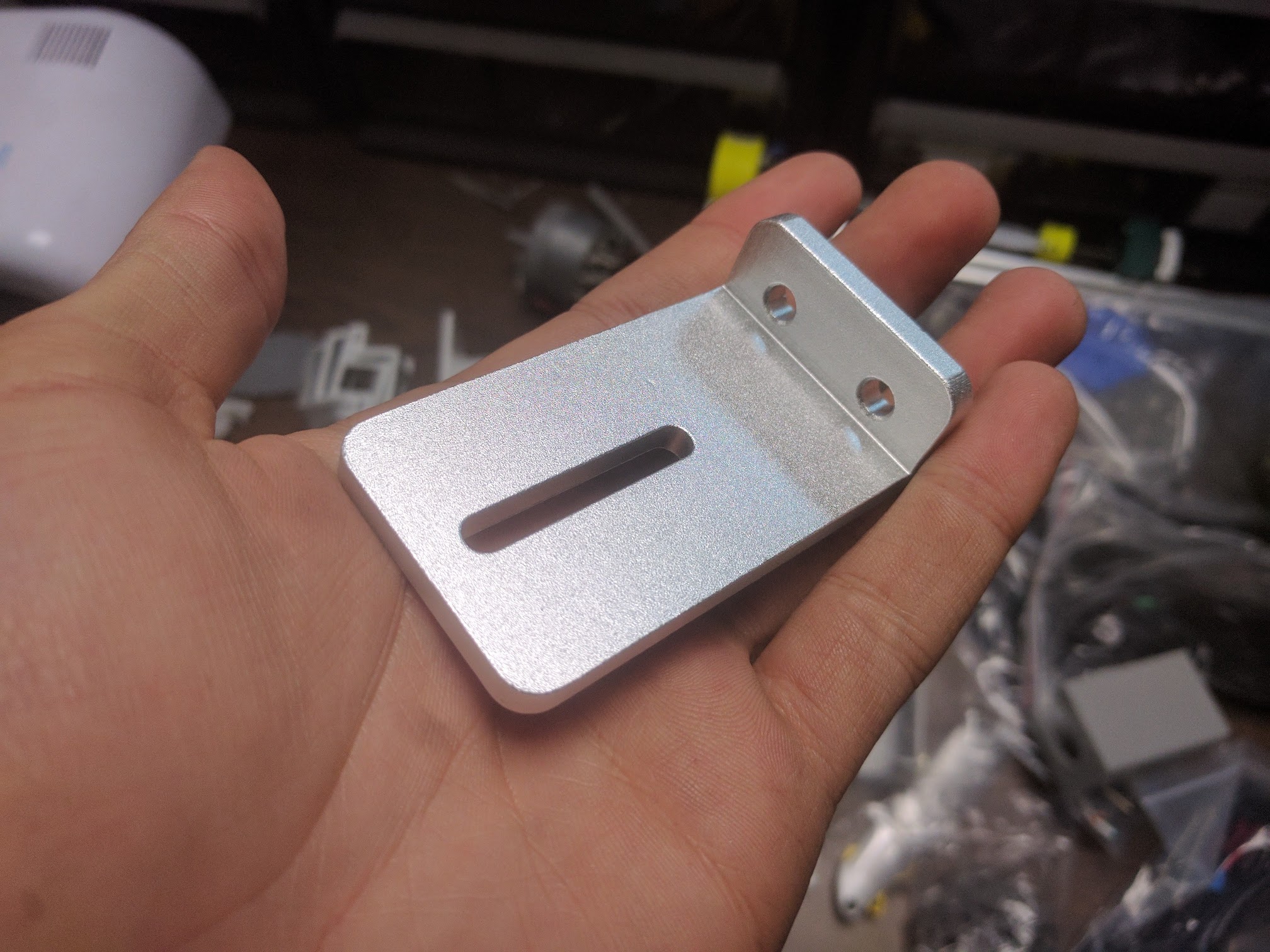 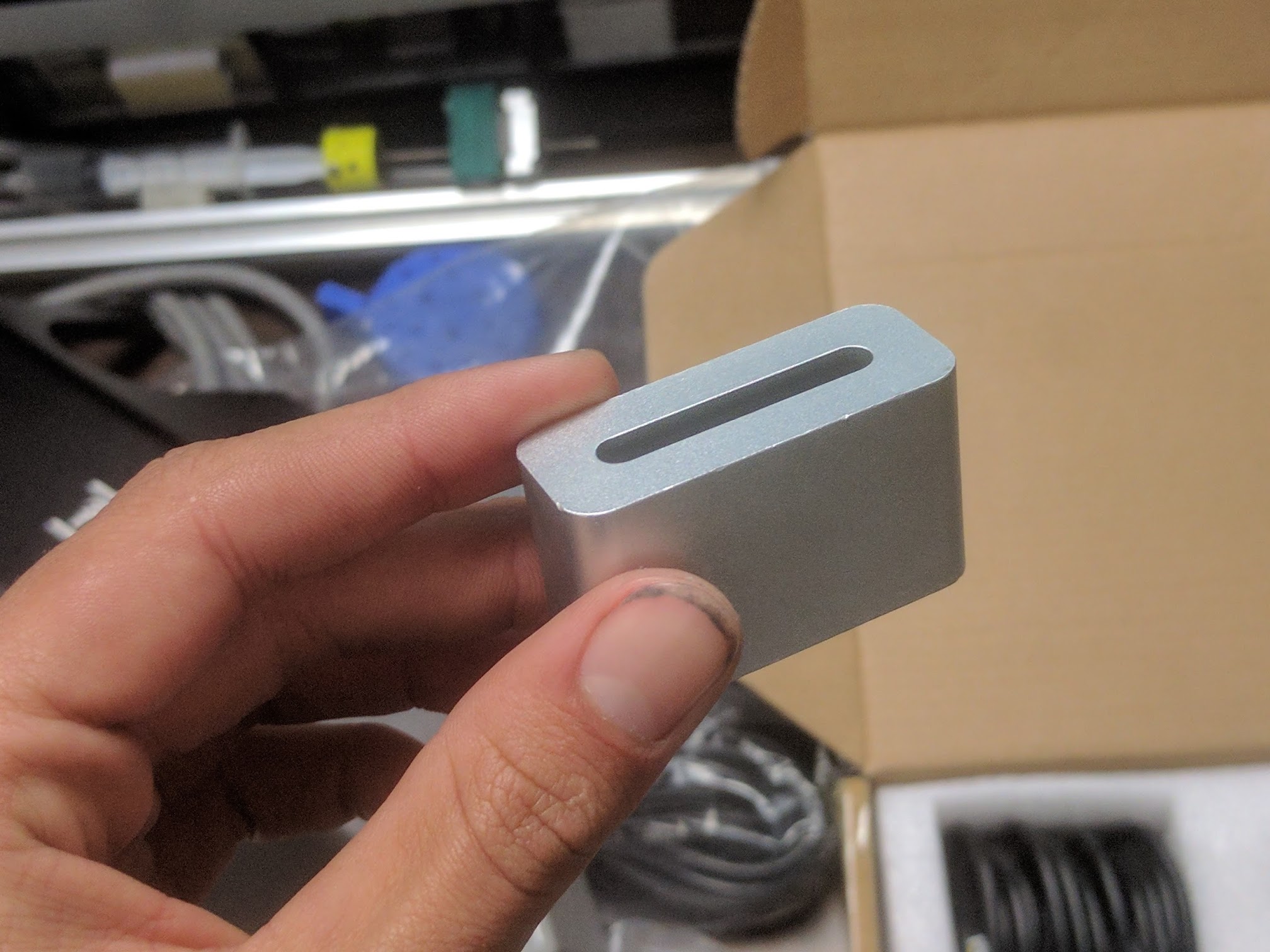 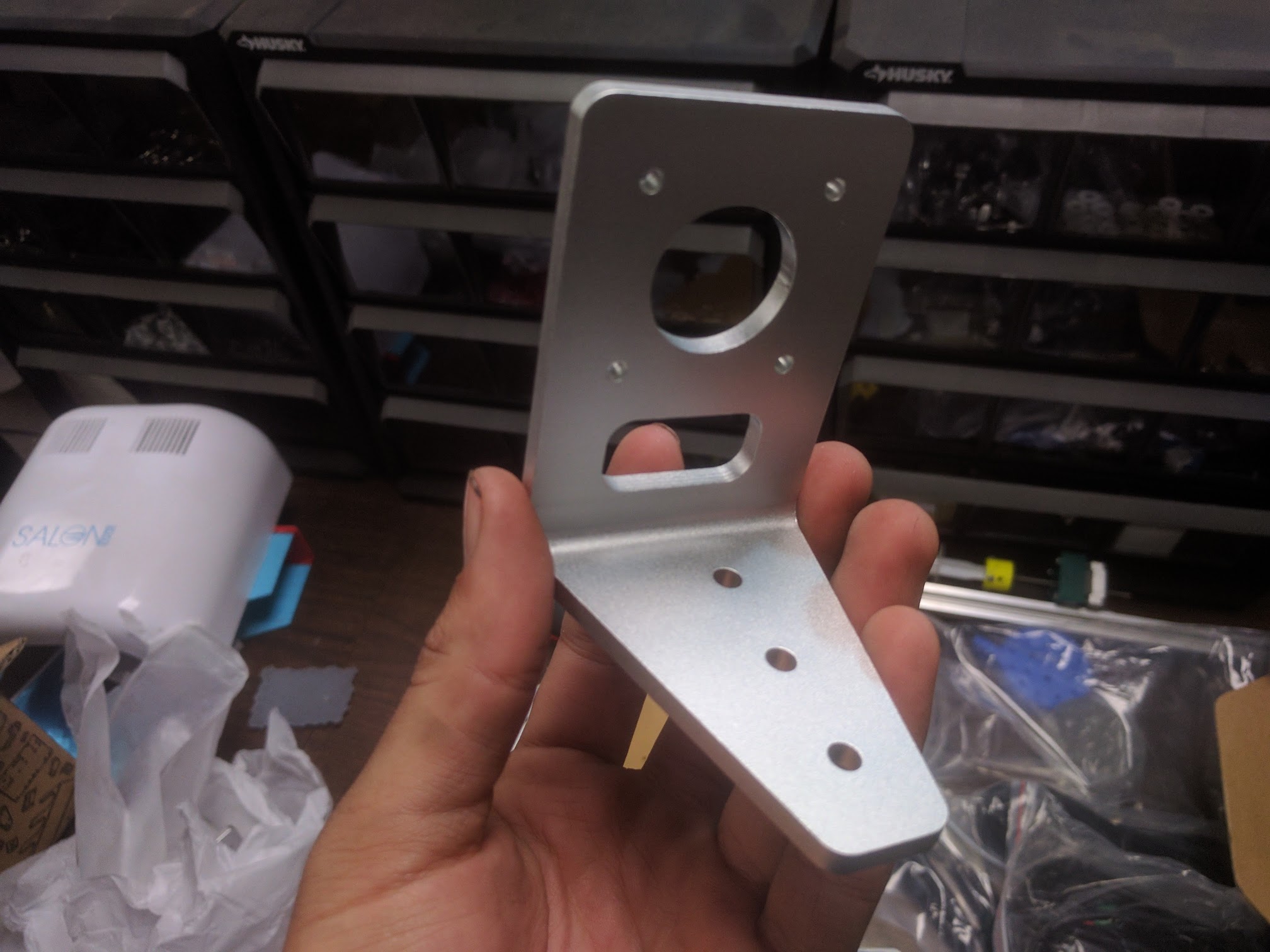 The FarmBot logo is no longer cut out of the metal. Instead the entire tool bay is anodized black and the logo has been laser engraved onto it. 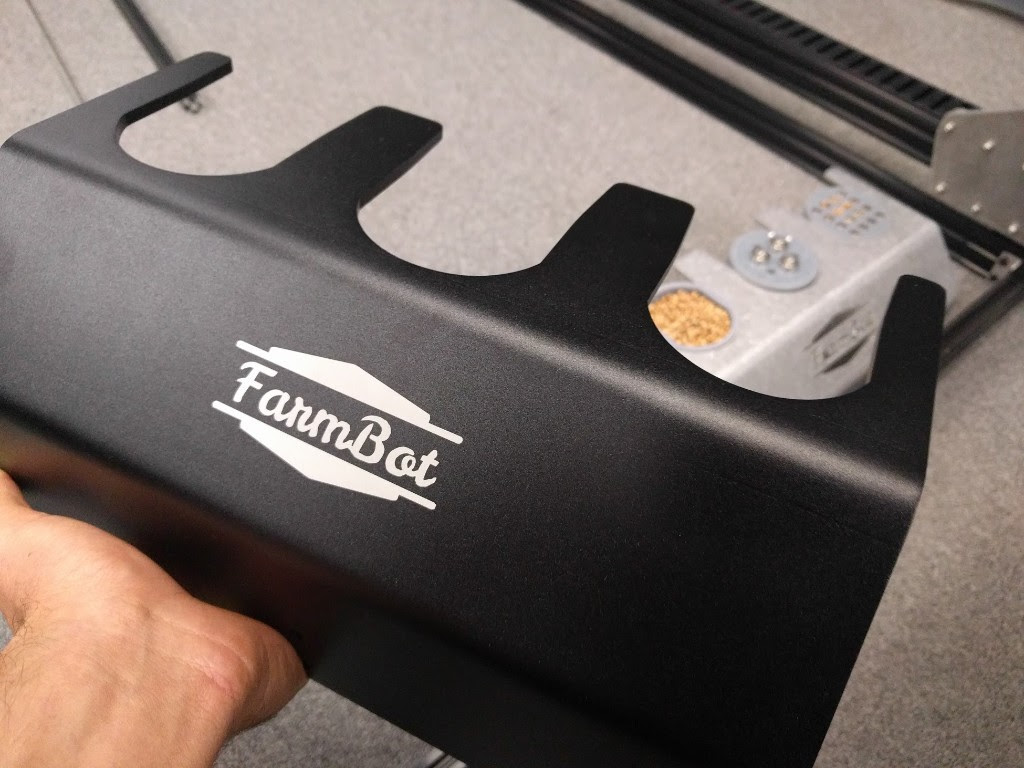 A borescope of sufficient resolution and proper focus is a more optimal solution from a cost, aesthetics, and functionality perspective.

The previous watering nozzle design could only be produced with 3D printing because of the complicated internal cavity features.

The new design is a two-piece system that allows the individual pieces to be either machined or injection molded in addition to 3D printed. The two pieces are then screwed together using the same screws that hold the magnets onto the tool. 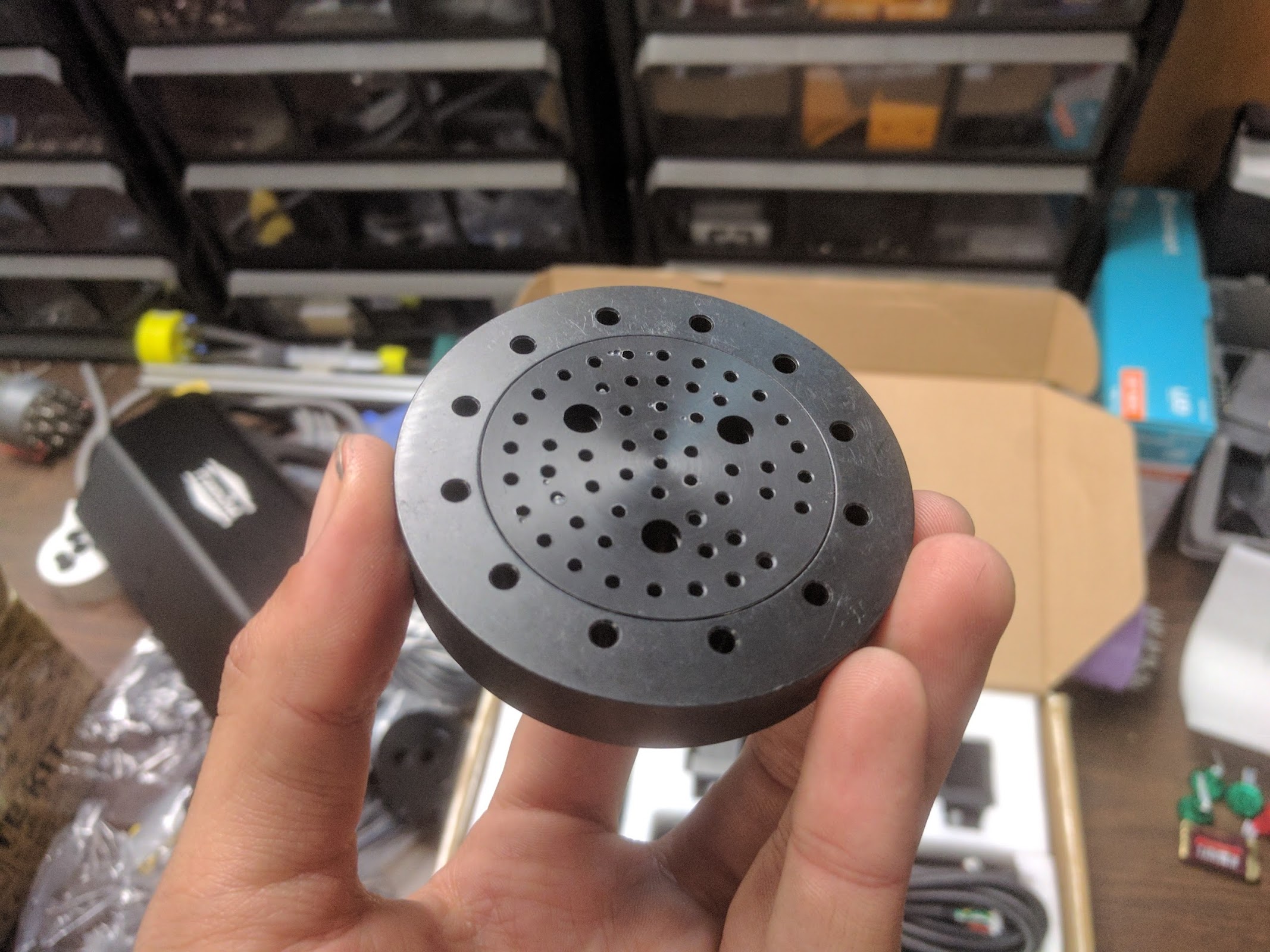 The previous seed injector design could only be produced with 3D printing because of the complicated internal cavity features. Furthermore, the design had poor internal airflow properties, and was an expensive component to produce that was limited to one orifice size.

The new design uses a more easily produced tool base that can be machined or injection molded in addition to 3D printed. Interchangeable luer lock needles allow the user to switch out the orifice size of their seed injector in just 10 seconds and for very little cost. This will aid the user in finding the best orifice size to use for their particular seeds and soil conditions. We plan to ship a variety of luer lock needles with every FarmBot kit. 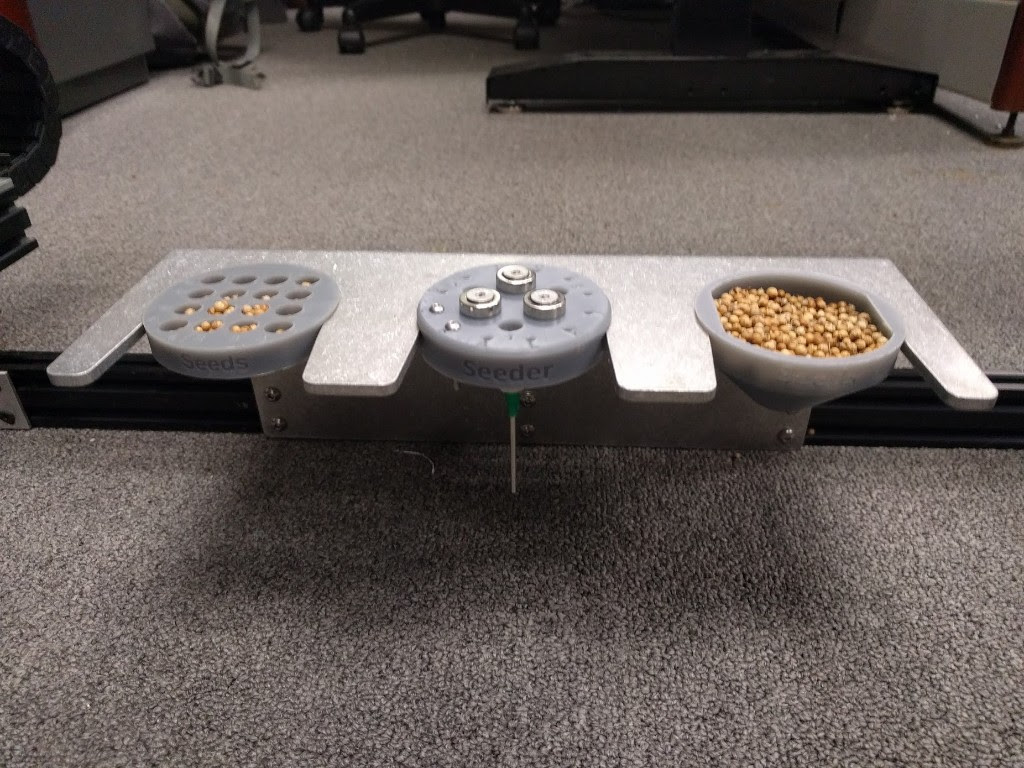 The previous version of the weeder was a single 3D printed component that was not customizable. Because everyone will have soils of various textures and types of weeds, we thought it would be more effective to have a weeding tool design that people could customize to work best in their conditions.

The new design consists of a tool “base” that “implements” can be attached to with M3 screws. The implements included with the first batch of FarmBot Genesis Kits are three plastic “spikes” and one plastic “blade”. This combination has proven to be effective at burying unwanted plants under the soil while not being too difficult to push down. It has also exhibited a low likelihood of becoming clogged with soil.

With the customizable design, users can change the configuration of the implements, choose to add more or fewer, and can also experiment with other types of implements such as corkscrews, rods, and other forms. 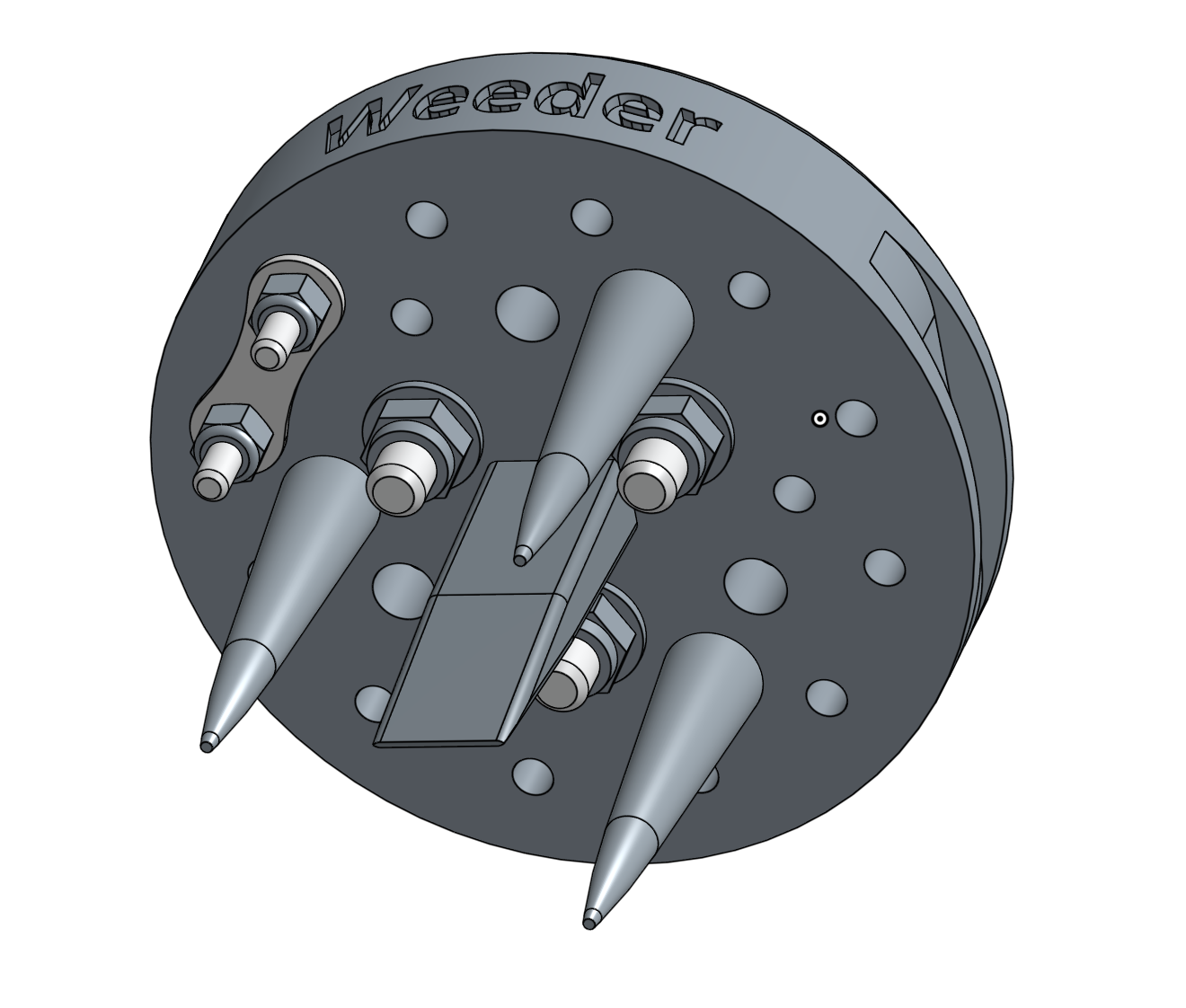 All tools and UTM

The text labels on the top of all Tools, Seed Pucks and Trays, and the UTM have been laser engraved for production parts instead of embossed into the part. This process was less expensive than machining and allows the text to be more easily read because it produces a higher contrast text. 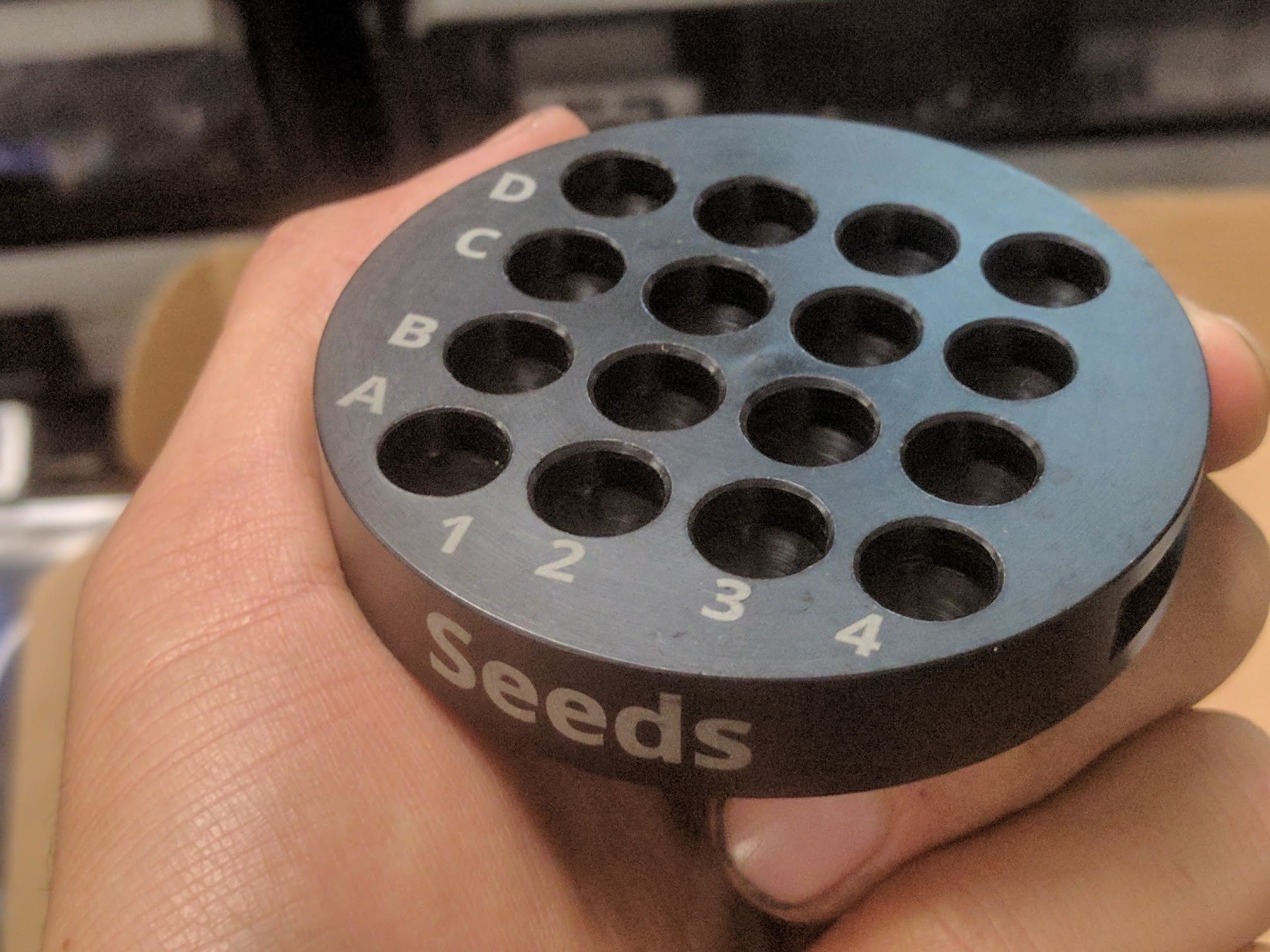 Previous Tools used a short jumper wire zip-tied between two of the electronics screws to serve as a way for FarmBot to validate if Tools are mounted or not. In v1.2, the jumper wire and zip-ties have been replaced with a small piece of metal called a Jumper Link that is secured attached between two adjacent electronic screws using the already existing M3 locknuts. 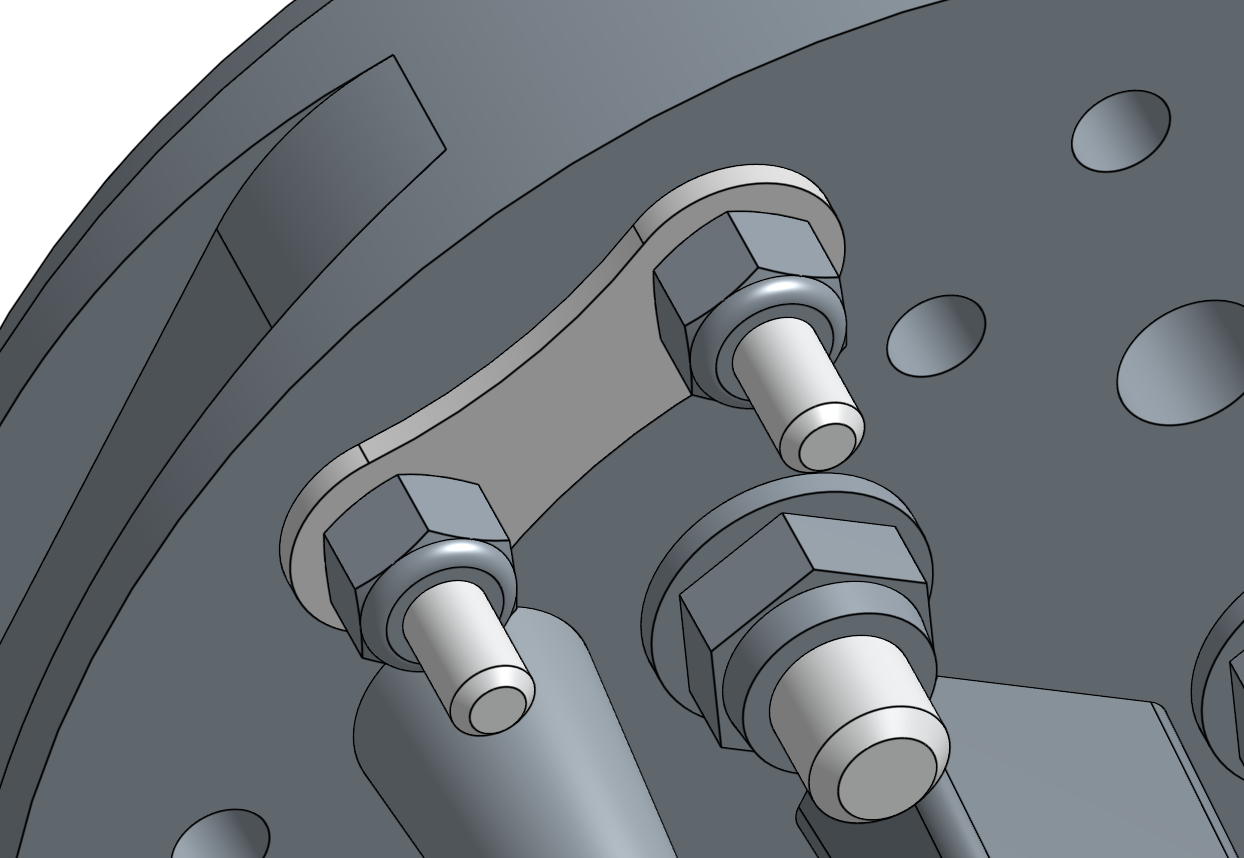